One of the reasons for which maps are drawn is to chart hitherto unknown terrain. The map I used as raw material for this business card shows a developed rather than a ‘natural’ landscape though: as Human Geography examines – amongst others – the relationship between human issues, and space and place, the collage aims to highlight the way in which human factors shape landscapes; and vice versa.

Below two artworks from the same series of collages, as well as the artwork used in the card’s final design.

An inconspicuous yet masterly woodcut from the Rijksmuseum’s collection is Ohara Koson’s “Group of Egrets” – the print that I had in mind while working on this birth announcement.

A birthday-invitation-gif – the hardest part in the making of which was neither design nor animation, but to visually establish a rhythm in a medium that is basically mute.

The collage used for this birth announcement is made of Japanese paper. As I had been asked to make something non-representational yet fittingly evocative, I figured that working with delicate, warmly hued paper would probably be a good fit. 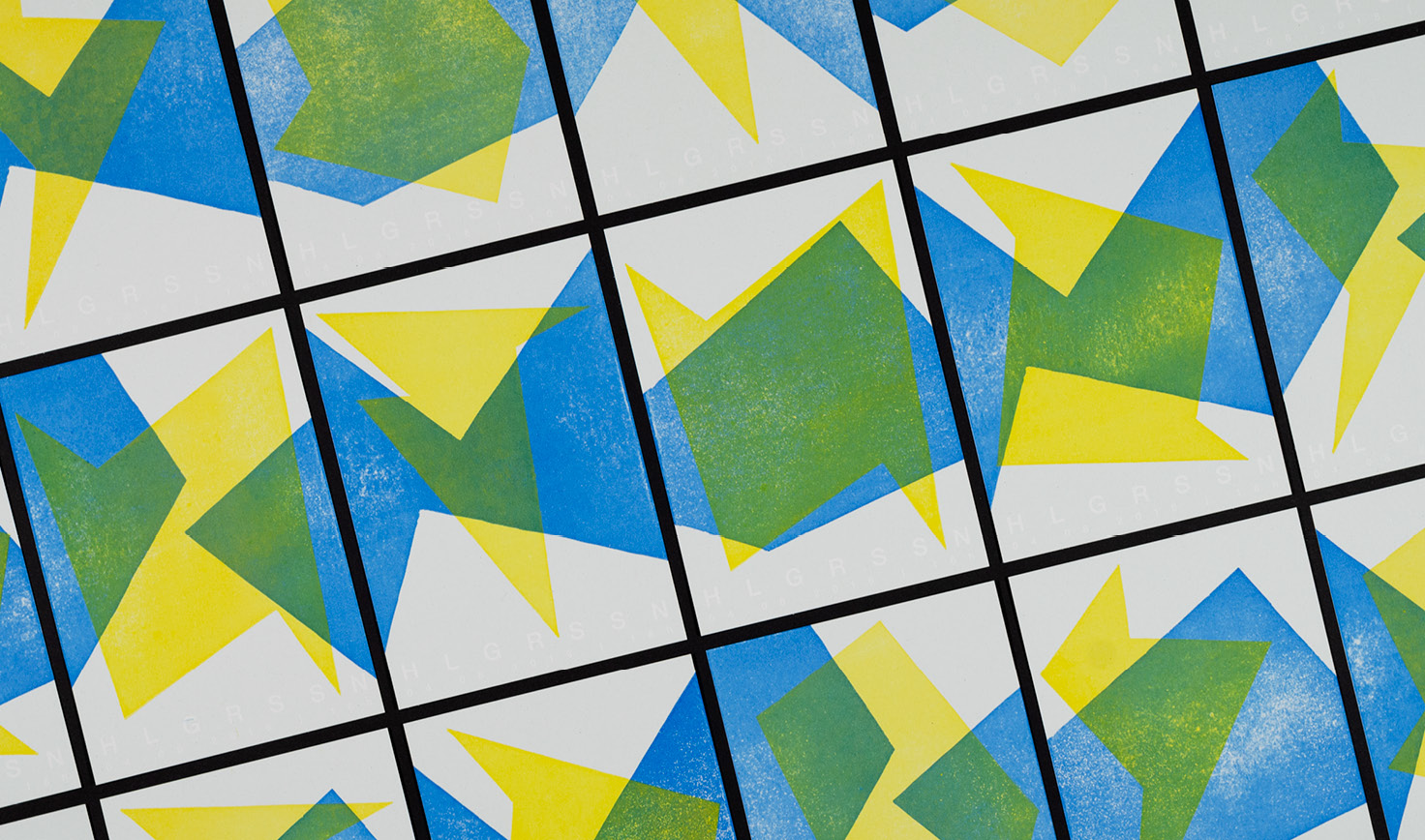 I employed two printing techniques for the making of this invitation card: the pale blue background and the writing were printed in offset, on top of which I printed blue and yellow linocuts.

Given that I wanted the linocut art to be a combination of two separate elements, I drafted an assortment of shapes that would eventually merge in a twofold composition. 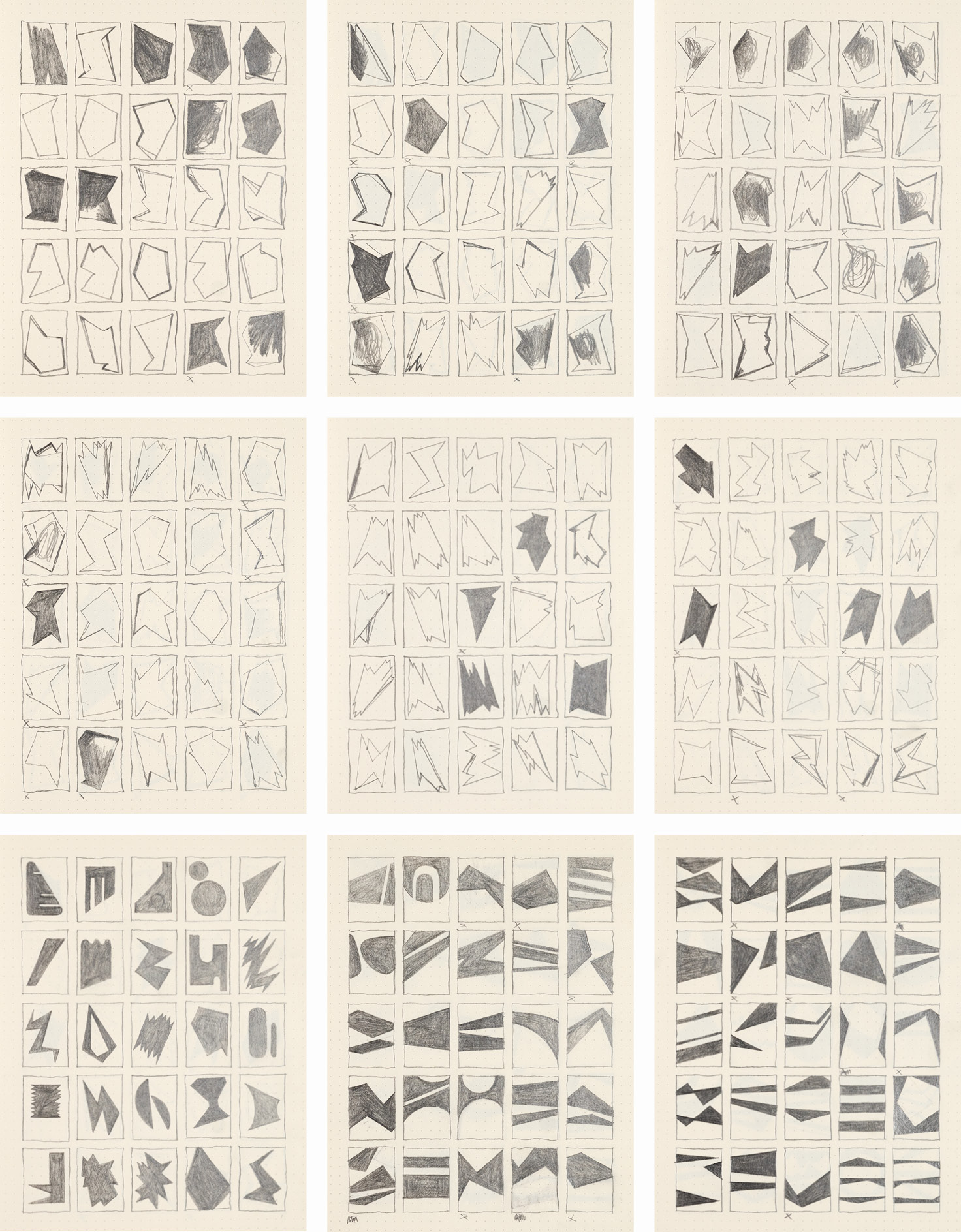 I designed this flyer together with my dear friend Yejin Kwon. Yejin took the photograph on one of her daily walks to and fro the Brussels studio in which she was working at the time. Though this particular design did in fact not make the final cut, I’m still rather fond of the atmosphere it conveys.

The drawings featured on this invitation card’s front and rear were designed ‘as one’: when splitting one single design in two and printing it on both sides of 80g paper, the paper’s thinness will allow the original, ‘single’ visual (see drafts bellow) to re-emerge. 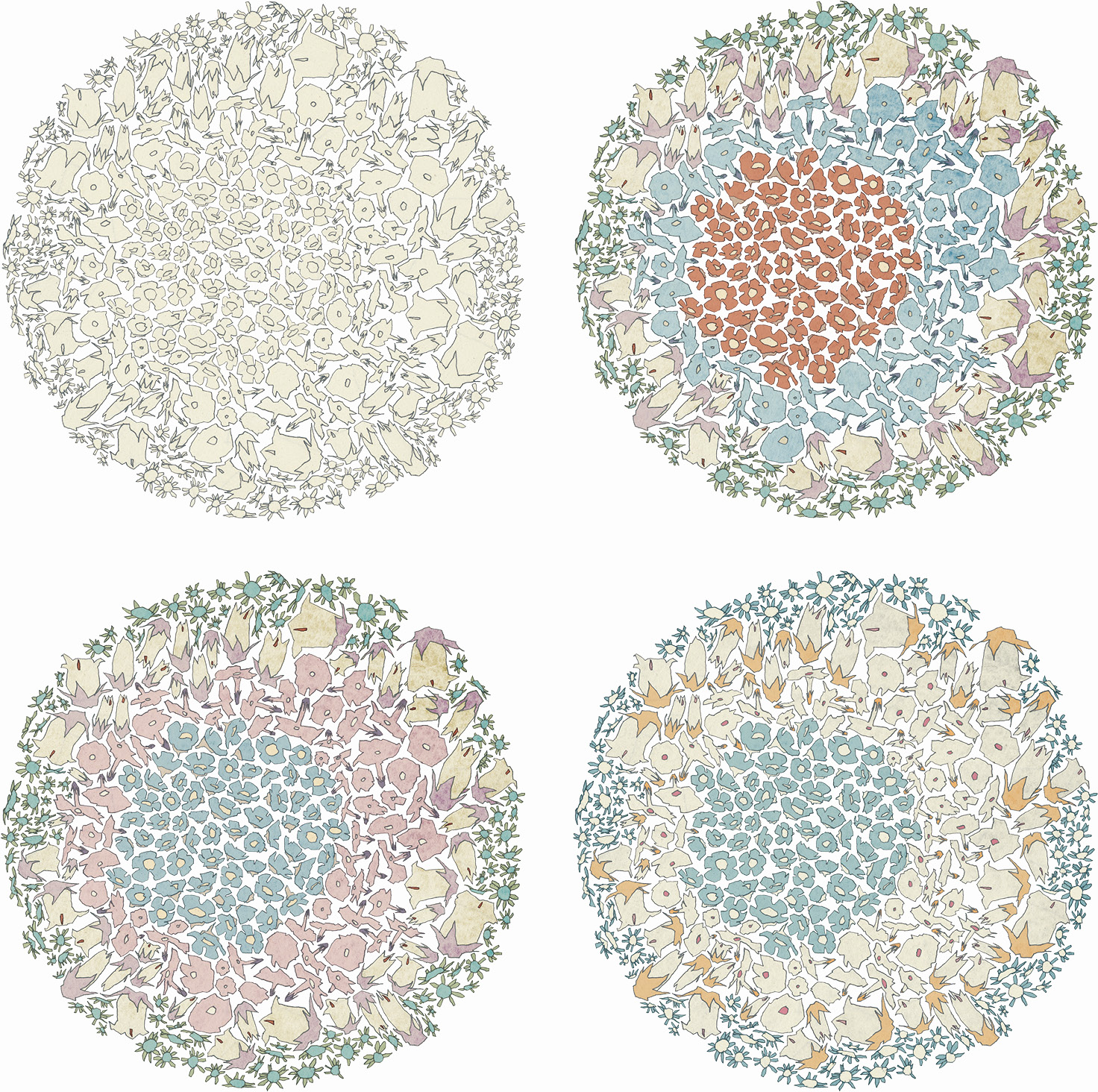 The gif below served as the printed invitation’s digital counterpart. It is the somewhat unorthodox attempt to pair a stereotypically Japanese, sparse aesthetic with the concept of horror vacuii, the fear of empty spaces.

Both a greeting card and a riso-print featuring the wide-eyed monkey that is part of the series of illustrations I made for this Chinese-Zodiac-Business-Card of mine can be purchased from my online store.

Orangutan is a set of six typographic stamps modelled in the form of a dice. Each of the dice’s six sides’ shapes can – through repetitive use or in combination with the other five shapes – be used to form all 26 letters of the Roman alphabet; or anything else really.

While the loop above features one possible configuration of each letter, most letters can also be assembled in numerous different ways.

The project right below features a typographical design for which I made use of Orangutan’s formal vocabulary. 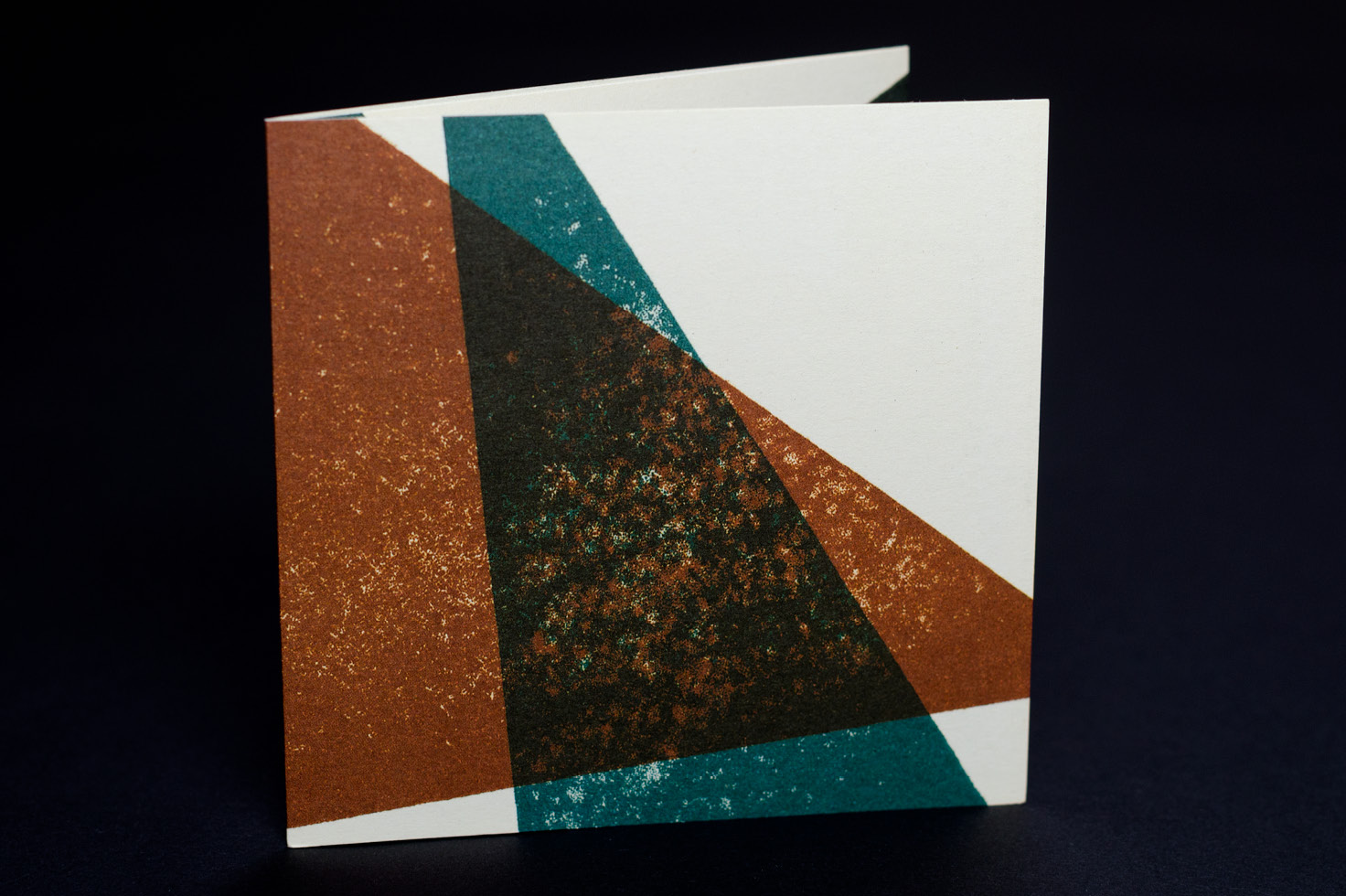 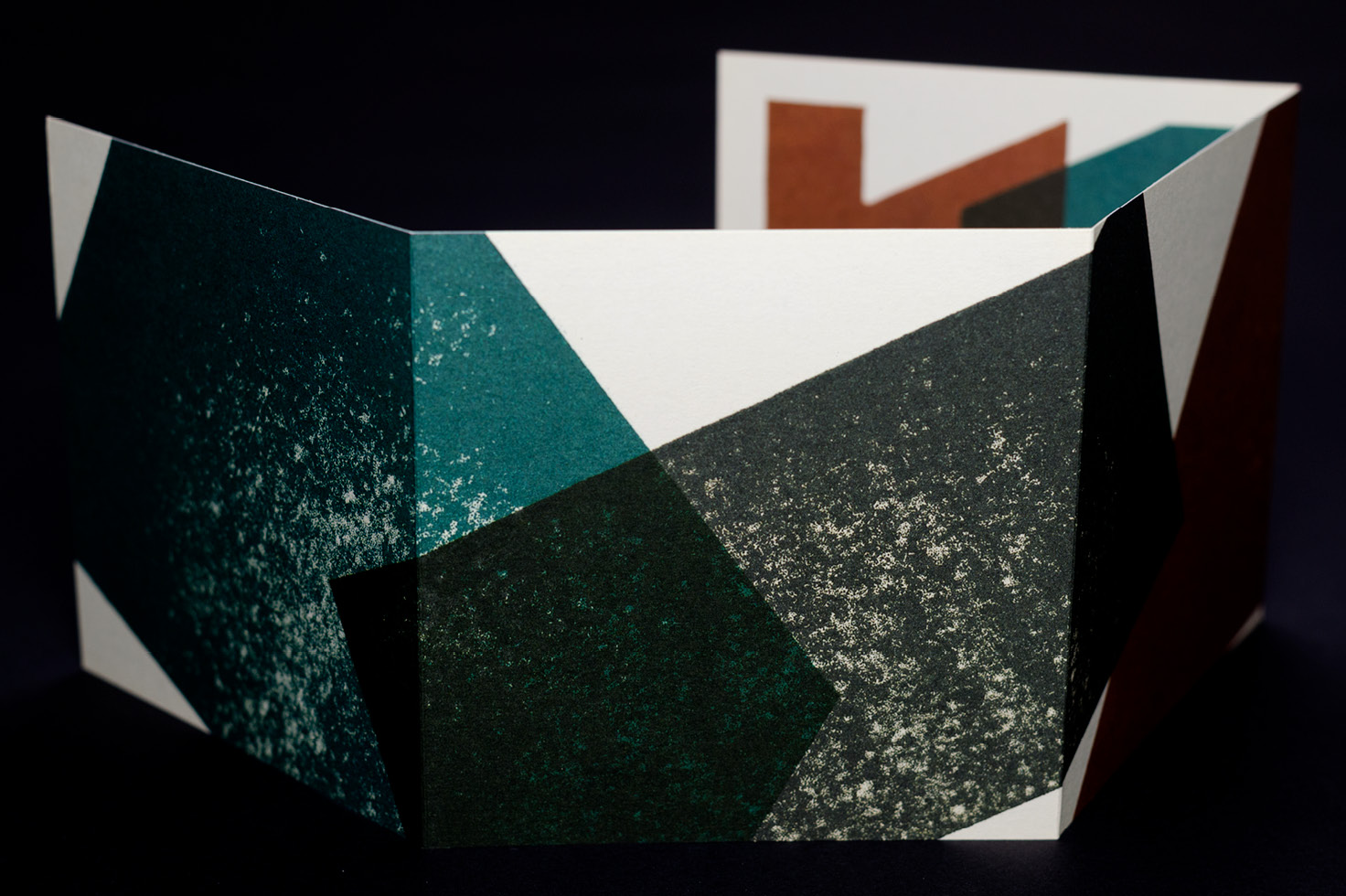 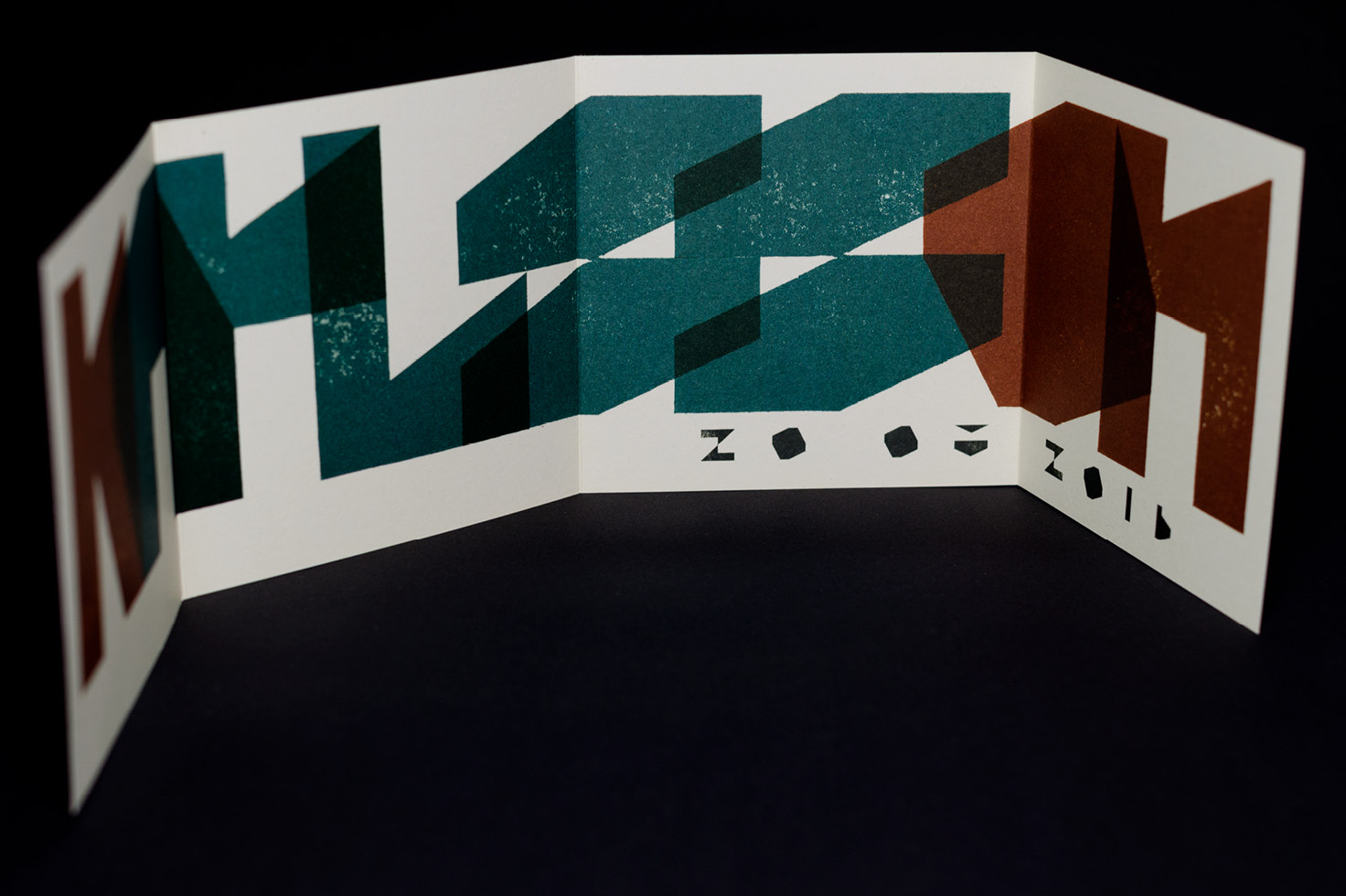 This invitation card’s typographical design features the set of shapes I developed for Orangutan (see above). Given their bold appearance, I treated the letters as a visual rather than textual element and positioned them accordingly.

This bookmark was designed and printed by the Dutch online magazine Tijdschrift Ei. It features a poem by J.V. Neylen alongside a drawing of mine. Good match!

These are the invitation cards I designed for my grandmother’s 90th birthday – printed in four different three colour combinations on the risograph. 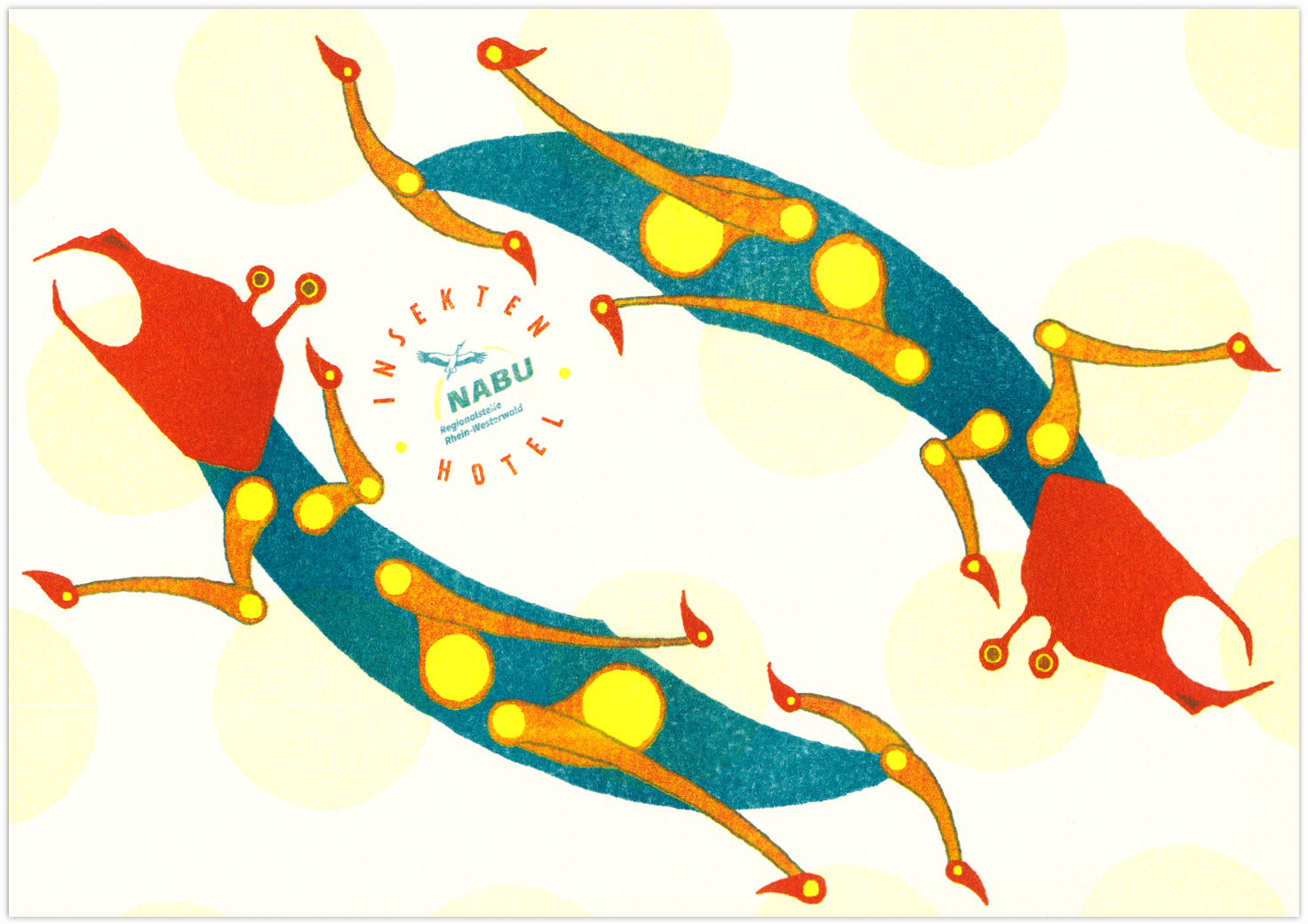 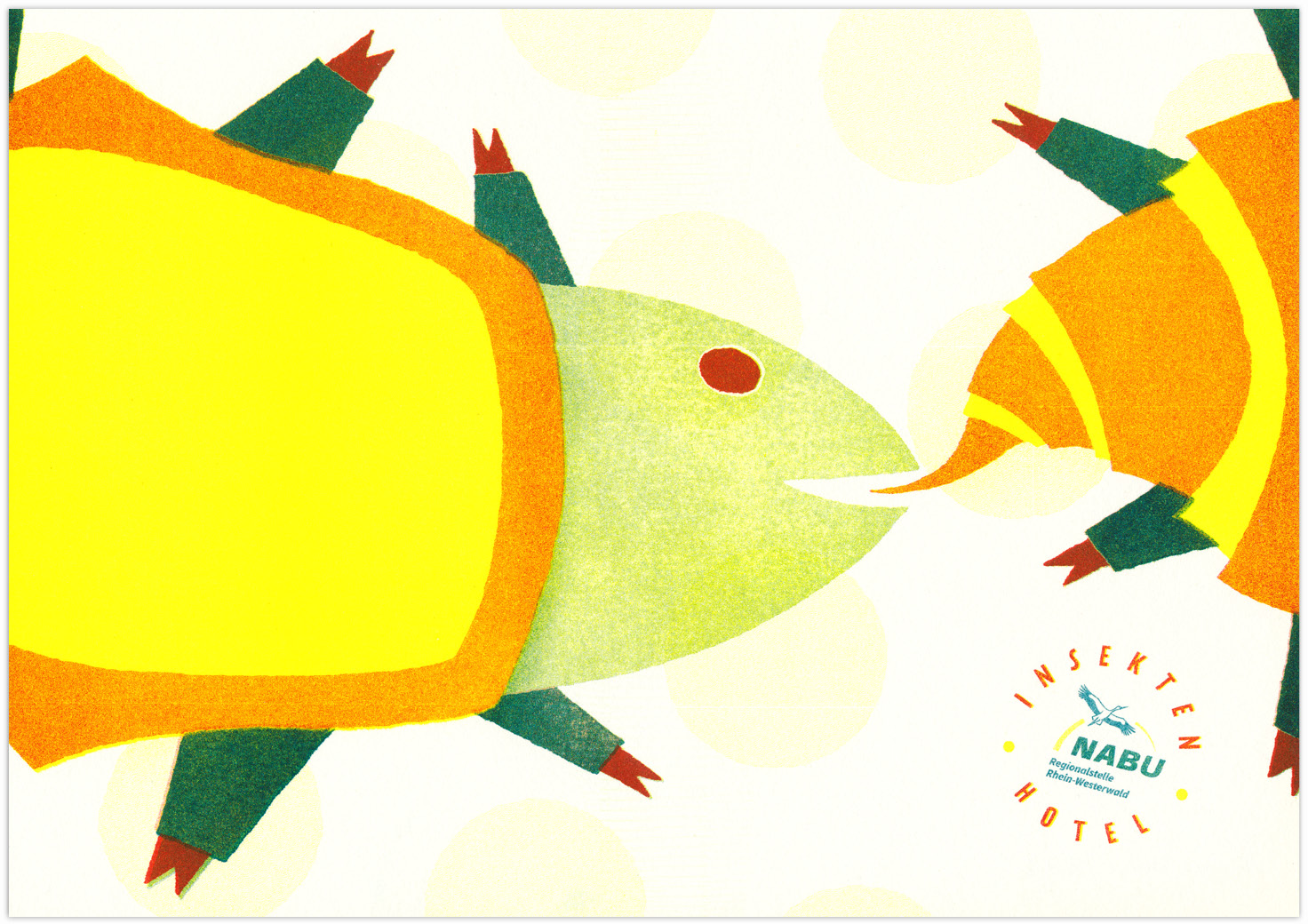 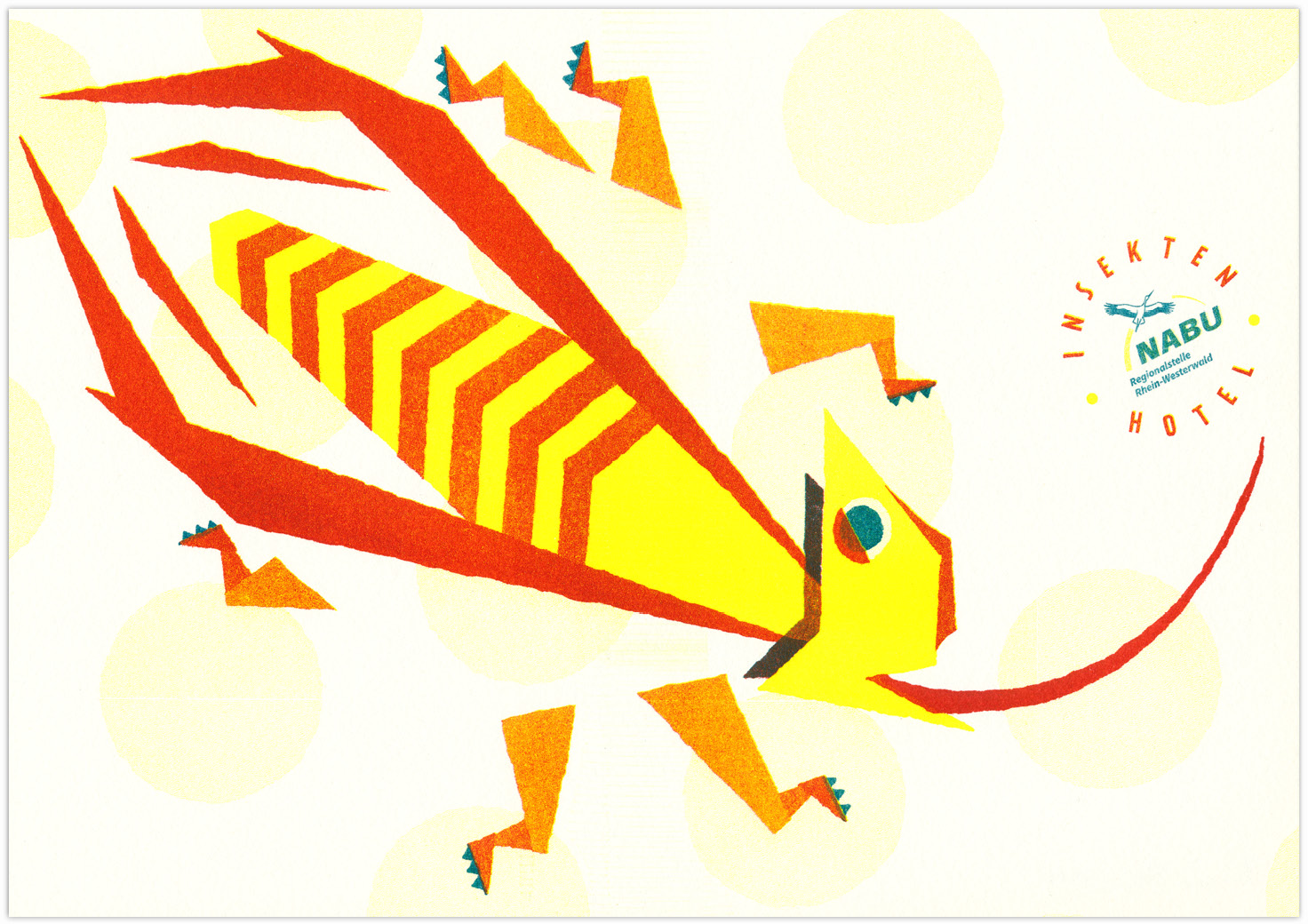 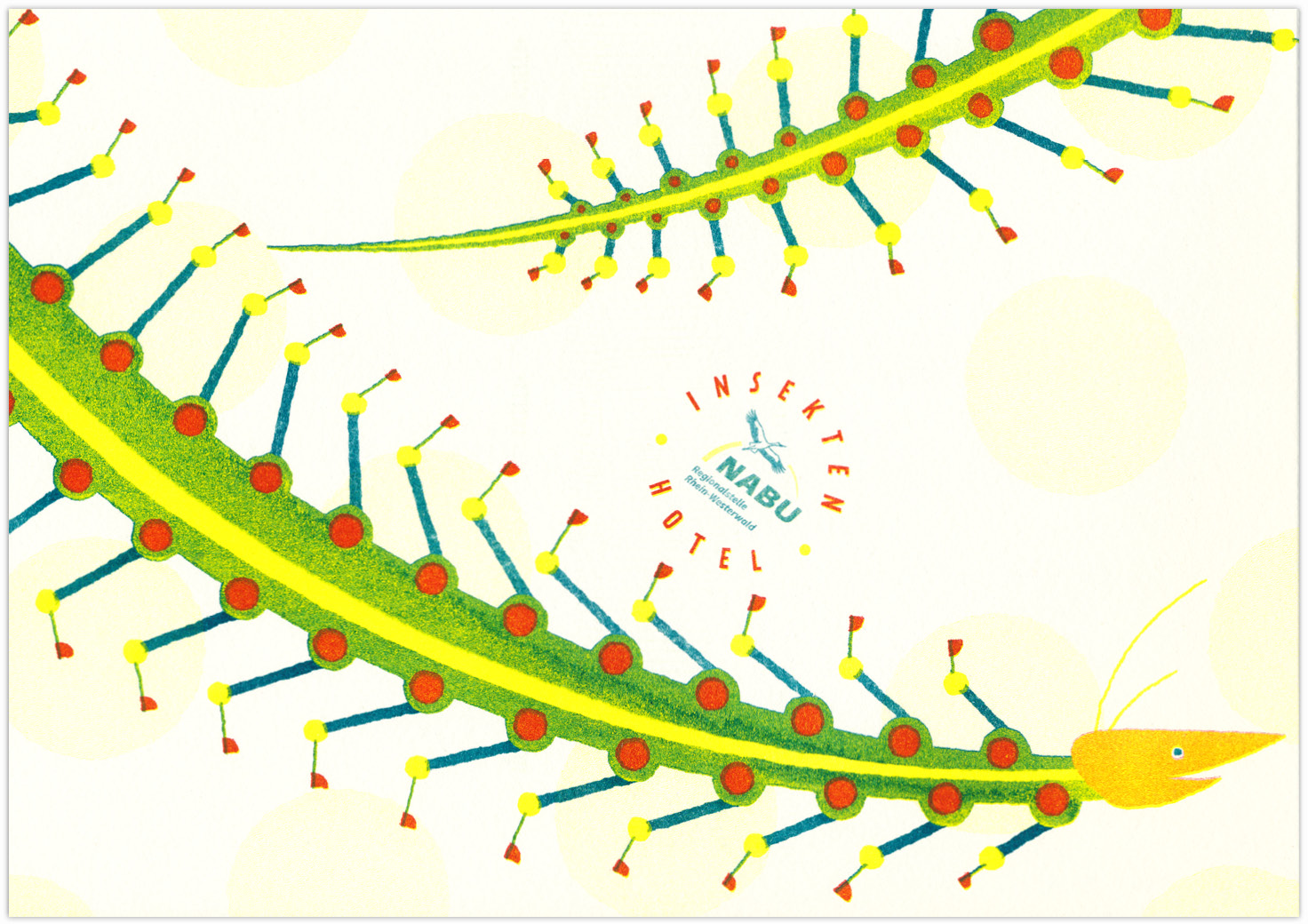 I designed this quartet of riso prints for a regional campaign by NABU, a non-governmental German ecology group. While putting four different, fantastic insects front and centre, the prints’ polka dot background touches on one of the insect hotels’ most striking visual features: the holes providing shelter for solitary bees.

For a nominal charge covering production costs, signed and numbered copies of all four prints can be purchased from my online store.

People in a Field 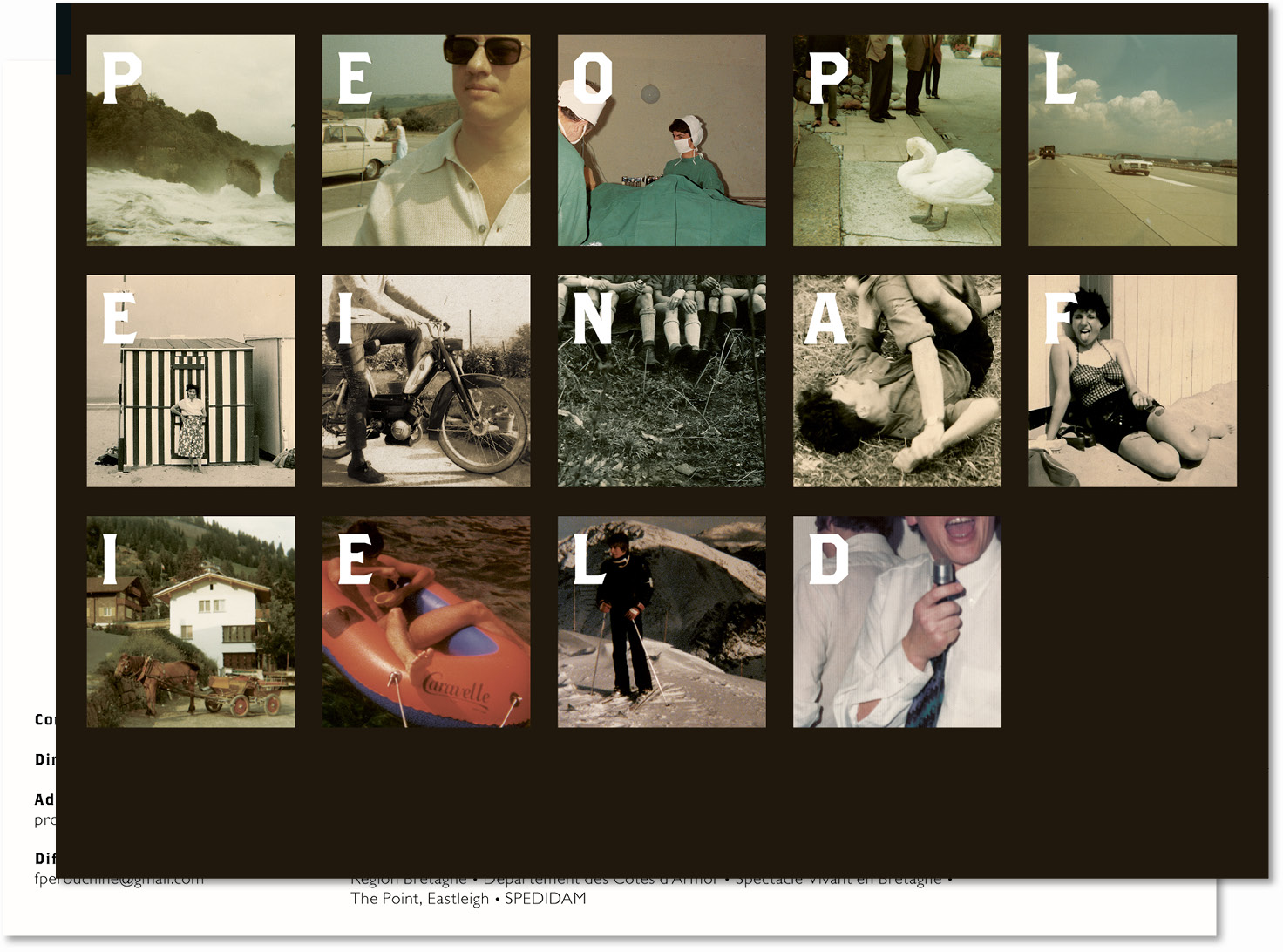 I never got to see my dear friend Simon Tanguy’s piece People in a Field on stage or in rehearsal. Instead of explaining the choreography’s concept or detailing his artistic approach when asking me to design the flyer, all I ever got from Simon was the production’s four-word title.

Given this apparently volitional ignorance of mine, I decided to work with a series of photographs depicting different kinds of scenes and characters. To advance the images’ randomness even further, I chose to only use photographs I had come upon by chance: all photographs excerpted for this flyer were thus tracked down at the Place du Jeu de Balle, that most famous of Brussels’ flea markets; below you can see all fourteen of them in their full flea market glory.

Kids of the Future 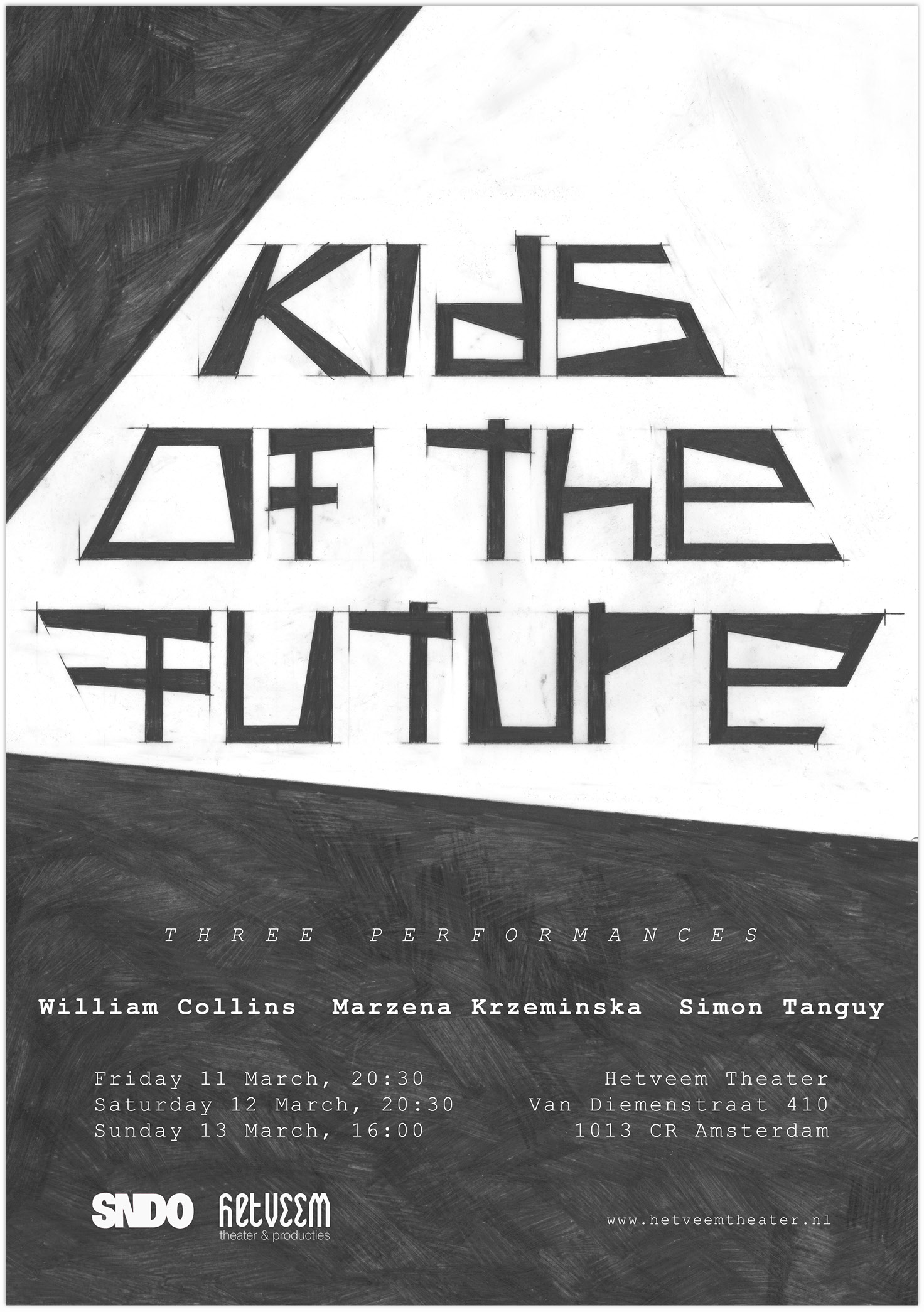 A typographic flyer I made for an evening showcasing three performances choreographed by Marzena Krzeminska, William Collins, and Simon Tanguy, then students at Amsterdam’s School for New Dance Development.